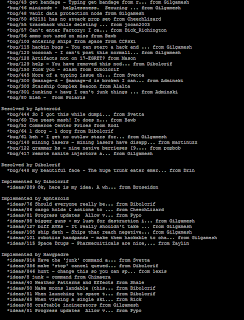 Intruders can hack this room to halt or dissipate the main weapon charge.  The main weapon can be recharged by crew or players with the starship engineering skill.  The more engineers present the faster the main gun will recharge.
* More guides added to the website
* Cleaned up indoor map display and spruced up the dreadnought interior:

We're not dead (yet)

Progress has been sort of slow, mostly because of life getting in the way, a couple of folks being burnt out and everyone forgetting to post updates here.
So I'll compile the last month's changes in a list:

- One of (hopefully) many guide holodocuments.
- Support for multiple attack/strike/miss messages on weapons, and many weapons getting multiple of each message.
- Trading cards and trading card albums for you to hoard even more text with.
- New comedynet taunt messages for various forms of death including bleeding, lightning, vacuum-induced explosive decompression, etc.
- Wildlife spawning with a randomised size ranging from 'tiny' to 'gigantic' with a health/dice multiplier respective for their size.
- Robots now gain a health bonus (1/2 of quality added to their health) and dice bonus (1/20 of quality added to each dice) for their craft quality.
- Barren and planets lacking atmosphere are now victim to asteroid showers of varying intensity, these may or may not turn you into a human pancake instantly.
- The paramedic AI module randomly given to some civilians is now actually functional and the chance of a paramedic civilian actually bandaging an injured person is influenced by their intelligence and reliability stats which are in turn influenced by the civilian's randomised personality traits.
- The 'gear' command now shows what kind of, and the quantity of ammo expended by an attack, if the attack consumes ammo and now has funky colors for each kind of dice. Neat.
- There is a (currently) 4% chance of weapons being looted from dead things/loot containers as a 'superior' version of that weapon, this gives the weapon a randomised set of stats which makes it generally better than it's mundane counterparts. This isn't mutually exclusive with existing weapon prefixes, so a fastfire dalix laser pistol (!) is going to be crazy fast (up to a certain degree, duration bonuses are capped up to a point so any increase in duration bonus is shunted onto another stat instead) and likely hilariously powerful.
- The Better Materials skill now gives a passive 1-3 quality boost to any materials you harvest.
- Two load carrying-related skills in the survival tree, Strong Back and Packrat. The former allows you to carry 40% more weight, and the latter allows you to carry 25% more items. Useful if you enjoy carrying ridiculous amounts of stuff around.
- A new tv station 'SENSI', the SensiVision channel which features a news reporter and a bunch of terrible adverts and stuff. The reporter will also report any interesting happenings (if anything interesting ever happens, that is), notably faction chapters getting exterminated because they decided to colonise the middle of an ocean or a volcano or something.
- A prototype of a waypoint-based cave generation thing.
- A prototype crew organisation/assembly system.

Ok that was a lot of text, so here's some pictures: