* moved to a new server for half the cost with double the RAM
* added airlock doors to some starship interiors, allowing you to vent anything in the airlock into space
* added ship intercoms
* a multitude of spawner improvements, mainly to support & implement a full 3d on demand spawning for digging and climbing.  Which does work at last:

* a variety of other random fixes
* digging in it's most basic form: 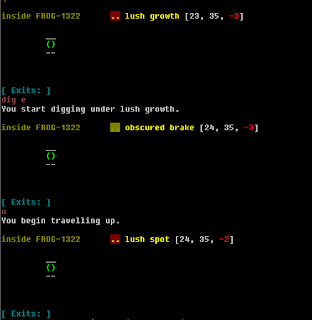 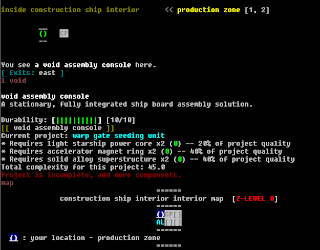 I went on vacation for a week and got a bit behind on stuff. One thing I'm pushing towards is getting civilians to do stuff on their own, notably making their own stuff and gearing themselves and their buddies up with gear that's better than the terrible civilian clothing they start with.

This hasn't been going too badly so far, I've got the gathering AI module functioning. 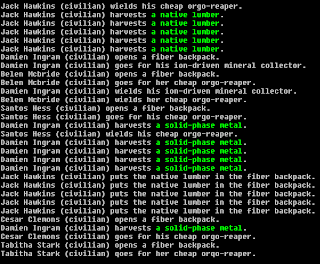 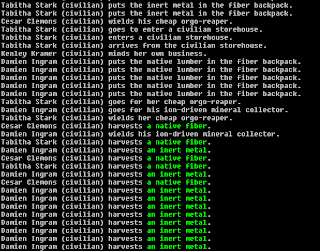 The AI module is supposed to 'guide' the civilian, what it's actually doing is grabbing them and forcing them to do all these things. In short, the civilian decides what resource they are going to gather, see if they've got a backpack and relevant tool (and automagically spawn them if they don't) then attempt to harvest ten units of that resource. They will then stuff all that into their backpack and continue harvesting until their backpack is carrying 20 units of resources, where they will then attempt to find a storehouse (and construct one if one isn't present) and get all the resources from their backpack and put it inside the container inside the storehouse.
They then repeat the whole thing until the storehouse container is full, after which they'll go out of their mind and walk in and out of the storehouse and freak out, or maybe drop their backpacks in there and stop harvesting like they're supposed to.

I have done some other stuff too:
I made some demolition weapons, the 25mm grenade rifle and 40mm grenade launcher and their respective ammunition. The grenade rifle holds five 25mm grenades (convenient, as a box of 25mm grenades contains 25 grenades) and is supposed to be some crazy semi-auto launcher or whatever. The grenade launcher is supposed to be a break-action double-barrelled affair and thus holds two 40mm grenades, (also convenient, the box of 40mm grenades contains 16 grenades).
Both of these weapons deal solely explosive damage, making them useful for fighting against buildings and pretty much everything else. I also made a vehicle weapon that uses the 25mm grenades as ammunition, the Assault-class Rat Gatler which is a pretty nasty piece of kit to be on the receiving end of.

Posted by Unknown at 3:02 AM No comments:

* Ignore command added
* Demolition charges are available on the engineering tool.  These explosives are capable of destroying enemy buildings.  They must be claimed and armed first, then remain armed for a 12 hour (real time) period before exploding.
* WHO revamp
* implemented the second medigun, which heals the assist target, as well as nearby party members
* @play now has access to combat and the kill, scan, examine, and tactical commands
* new reactive healing gadgets:

Posted by swampdog at 2:35 AM No comments:

Another truckload of changes in the past few days, mostly revolving around civilians and their role in the colony. Whilst we had planned to make them work at the civic buildings you construct this never actually came to fruition.

Instead, I made them available for the controller of the sector center to use as personal bodyguards, if you control their home sector center then you may ask them to follow you or to stay put as you command, if you give them weapons they will gladly wield them (and automagically reload ranged weapons with ammo produced from their magick pockets) and if given a piece of armor they will either put it on, take off an existing piece of armor in the same slot and replace it with that given to them, or reject the new armor if it's value is lesser than their existing piece.
All this, and you can now construct a militia barracks which will encourage the civilians to perform training exercises to improve their maximum health and maximum dice pools, making them more effective bodyguards and defenders of their colony. I also payed some attention to the sector center itself, changing the description of the governor's office to account for statistics including, but not limited to bonuses from surrounding civic buildings and the maximum population the colony's total civic bonus can support. (Generally five, plus the total civ bonus divided by two).

In short:
- Civilians are available to colony owners as bodyguards
-Civilians now accept equipment from people
- Civilians are able to improve their terrible default health and dice pools (with some help)
- Sector centers now update their maximum civilian allowance every three hours dependant on civic building counts
- Civilian housing buildings are now un-hidden by default, now bear lootables of mediocre value and now have default damage resists
- Civilians sometimes spawn with default equipment such as colonial rifles and machetes
- Civilians sometimes spawn with an AI package to allow them to bandage wounds of them and nearby friendlies

Of course I did do other stuff aside from this things, but I'll keep it short:
- Changed food to actually make it beneficial, making it nearly always give you a status effect which provides a dice/max hp bonus and periodic dice regeneration
- More buildings, and more buildings for NPC factions
- More AI and improvements to existing AI packages to make them do less stupid things and cause fewer potentially hilarious accidents (like a complex two ranger being mysteriously dragged around the circumfrence of WY-1444 after a typo in NPC vehicle support)
- Various bug fixes, including the notorious 'oh my god I just typed get all and now I can't stop picking up things please someone kill me oh goooooood' bug and it's variants.
- please help i'm dissolving in text
Posted by Unknown at 12:47 PM No comments:

Aphteroid again, a few more noteworthy things I've made amongst the ocean of property setting and verb/action tweaks I've done to push progress on the underground.

Random weapon bonuses/modifiers, weapons looted off NPCs such as pirates may now have a random modifier such as 'light', 'heavy', 'serrated' and 'balanced', amongst others.

It was all fairly simple to do, but that's the joy of procedural generation- even a few simple rules can diversify gameplay to a great extent.
I used this new support for bonuses to make a tier 1.5 version of the Colonial Machete named the Bolo Machete, which requires 1 Plastiform Brick, 2 Solid-phase Alloy and 1 Responsive Metal, most of which require some effort and existing infrastructure to acquire.

On top of this, a few new drugs/injectors have been implemented:
- Those who have respawned will be given a bonus to all dice max and max hp for two minutes (approximately)
- Liquid food injectors for those who don't like eating.
- Two new drugs (blast-zone and jerkback) which immediately recover a large amount of dice and give some buffs/debuffs (and will harm you if you go over 5 doses).
- All of this involves the chemistry tool and medical workstation, which are somewhat unloved at the moment.

In other news, I scoured a whole bunch of items which didn't have credit values or correct components and gave them appropriate values respectively, and did a bunch of other things which I forget.
Oh, and I fixed bugs too.
Posted by Unknown at 11:30 AM No comments:

Aphteroid here. I got my nose to the grindstone for the whole of yesterday and early today and got a pile of stuff done.

- NPC factions now have a great deal more support, and in the nearby future will be populated on-the-fly with the birth of planets or when an existing faction is destroyed. Here is a funky image of the factions database's readout. 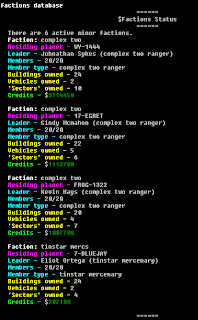 - Various bugfixes, tweaks and additions have been made, notably the ability to stop a hacking attempt and the ability to enter 'all' when crafting, this immediately transfers the required number of components from the highest quality components available to the tool.

- Scanning things, it actually gives you details about things in space now! (If you didn't already notice). 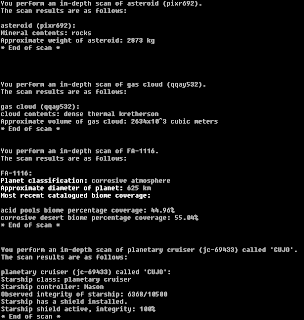 - Planets which are not hospitable, for example FA-1116. This little number is small, boring, and every inch of it's flatland-and-desert surface is covered in strong mineral acids and vents that jet the aforementioned acids everywhere. Luckily it didn't quite have the right conditions to generate oceans of mineral acids, but it's still horrid. 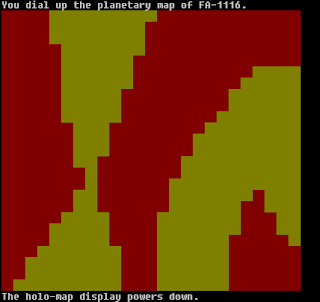 - Automated crafting workstations, which will pull components from their input hopper, assemble the product specified and put the finished product in the output hopper. This degree of automation should make lengthy processes such as starship construction or the mass-production of processed materials a lot easier.

- Moon phases, as 17-EGRET and 7-BLUEJAY both have two moons orbitting them, I decided to have the two moons have phase differences, adding a little flavor to existing moon phase messages displayed by the 'time' command (which I fixed, at some point in the last 2/3 months).

- Intelligent NPCs can now use weapons or armor. Whilst they will not wield weapons given to them, any NPC faction units or pirates will now spawn with weapons or armor with either 100% certainty or a chance of the item spawning. This is due to a spawn equipment support, and attack suggestion update I made a month ago which allows intelligent NPCs to spawn with weapons, armor and gadgets and hook into existing support for wielding the objects they spawn with, they will select weapons they are wielding before they use their standard attacks and will reload any ranged weapons that require ammo.

All in all, a productive month and a half, we're making strides towards our Alpha Stage-2 goals now, having nearly completely finished Stage-1 goals, expect good things in future.
Posted by Unknown at 6:16 AM No comments: