Everything went badly.
Posted by Unknown at 5:09 PM

A productive use of time

Today I decided to do something productive.

Things did not turn out as planned.
Posted by Unknown at 3:15 PM

This post is a continuation of the Hellcore $action tutorial.  It is broken up into three parts: a complete listing of the default $action properties, a complete breakdown of the extended $action verbs that can be overridden by your custom actions, and special usage of action on non $action objects.

These properties can be set on your action objects to control messages and behavior:

These verbs can be overridden with your own versions for customized behavior.
Special $action usage

Aside from using $action objects, you can use any object, providing it has appropriately defined _start and _finish verbs.  An example might be creating a throwing spear item with a THROW verb on it:
player:queue_action(this, {player.target});

The above example would queue the spear itself as an action (first calling _start, which would then return duration as normal) and passing player.target as the first callback argument.

A default action called verb is available in hellcore.  Similiar to executing a non action, this allows you to call any verb as an action (instead of requiring _start or _finish).  Example:
player:queue_action($actions.verb, {some_object, "_start_action", {callback1, callback2}, 5.0, 1}, "custom action message");

Where some_object is an object number or variable of type OBJ, "_start_action" is the actual name of the verb you want to call, callbacks are the callback arguments, 5.0 is any float representing the duration, and custom action message is a string to display as the doing_msg.
Posted by swampdog at 9:35 PM

Hellcore provides a 'game loop' in the form of the $heart object.  This object accepts registrations (for example of creatures and players) and every 30 seconds does a 'heartbeat' on every registered object.  When an object beats, the heartbeat verb is called.  NPCs, when doing nothing, can select an action via the verb suggest_next_action.  If the creature or player is already executing an action, the action is checked for duration and moves to the next step or resolves.

When to create an $action:
- a looping or multi step process
- a process where you'd like a delay between starting and finishing
- when you would like players and creatures to share the same code for executing a process

To initiate an action on a creature or player, you call :queue_action, like so:
player:queue_action($actions.some_action, {callback1, callback2, callback3});

Callbacks can be anything that the action is setup to handle.  For instance, here is a mock attack action being queued:
player:queue_action($actions.mock_attack, {player.weapon, player.target});

This would send the player's weapon and target properties to the action.  The player or creature executing the action is always available inside the action.

Actions begin at the _start verb.  Using the mock attack action as an example again, here is what one might look like, with commentary:

$actions.mock_attack:_start
"The player or creature executing the action is always the first argument.";
who = args[1];
"Next we retrieve the callback arguments provided when the action was queued.";
{weapon, target} = args[2];
"Print a message to the room or something, usually.";
who:aat( $su:ps( "%DN attacks %it!", who, target ) );
"At the end of start, after the duration has passed, _finish will be called with the same arguments.";
return {this:duration(), {weapon, target}};

After _start finishes and the duration has passed, the action's _finish verb is called.  We'll use the mock attack as an example again:

"The player or creature executing the action is always the first argument.";
who = args[1];
"Next we retrieve the callback arguments provided when the action was queued.";
{weapon, target} = args[2];
"Let's roll some dice and call it a hit on an arbitrary number.";
if(random(100) <= 25)
who:aat( $su:ps( "%DN lands a hit with %p %t!", who, weapon ) );
"For this example, we'll assume weapon has two properties indicating the damage type and amount.";
target:take_damage(weapon.damage_type, weapon.hit_damage);
"Returning E_NONE from any stage of an action ends the action.";
return E_NONE;
endif
"If we got this far, we missed.";
who:aat( $su:ps( "%DN misses %it!", who, target ) );
"Now we could just print a miss message and end the action, but for example purposes, let's try hitting again until we succeed.";
"When an action object is returned from _finish, the action is not ended and instead calls _continue.  This allows for repeating or looping actions.";
return {this, {weapon, target}};

$actions.mock_attack:_continue
"The player or creature executing the action is always the first argument.";
who = args[1];
"Next we retrieve the callback arguments provided when the action was queued.";
{weapon, target} = args[2];
"Print a message before passing back to _finish and rolling our attack dice again.";
who:aat( $su:ps( "%DN attempts another attack with %p %t.", who, weapon ) );
"From continue, we return a duration and our callbacks just like in _start.";
return {this:duration(), {weapon, target}};

Now we can use our mock attack action, either through a verb the player can access, or by returning it from an NPC's suggest_next_action verb.  If written correctly, you can use the same $action for players and creatures without modification, and using an $action allows for great control of the timing and interaction of the executing game codes.

For more information, see the HELP $action command as an admin on Hellcore.  I have also written an Advanced $action Tutorial which contains a full breakdown of the $action properties, verbs, and special uses.
Posted by swampdog at 6:25 PM 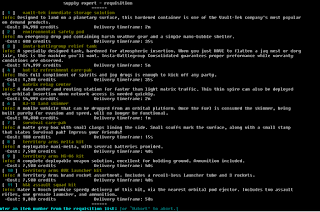 * Quality control skill command - INSPECT (allows the player to view blueprints a material or component is used in): 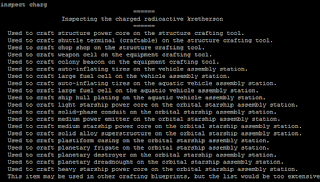 Whilst it may seem that nothing's going on as far as updates go, nothing could be further from the truth- 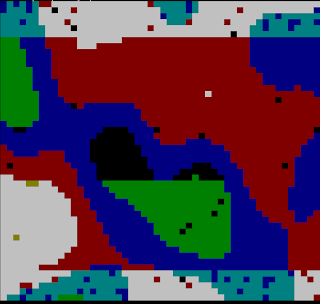 This is VN-1229. It's horrid and blocky but it's a test bed for a world generation layer which makes the equator hotter and the poles colder, whilst manipulating the biomes near the poles to give some semi-realistic replication of polar terrain. Currently this makes the entire planet look like a bizzare giant cylinder but with a little work and a perlin injection it should look a lot nicer.

On top of this, moon dungeons now have a hibernation system in which they'll hibernate, then junk any npcs inside them if there's nobody in them.

On the mundane side however many unannounced updates have been made, such as advanced materials from exotic asteroids and gas clouds in distant systems finding use as materials for advanced armor and weapons, as well as various improvisable items, new materials, new weather types, new biome types, etc.

Not far to go, beta gets closer by the day.

Let's go over the alpha roadmap and see what the status is:

Objective: It must be possible to build and launch a solar spacecraft and travel between planets in the same solar system
Status: COMPLETE!  In addition, travel between systems is working and four solar systems are currently active.

Objective: backgrounds and reroll mechanics must be complete
Status: Incomplete.  This still needs a fair amount of work.  Some reroll improvements were made.

So, not terrible, given the hobbyist level of effort.  In addition to these goals a lot of other stuff was added, including a fair amount of content, improvements to the underlying systems, etc.  At this point there is one more set of goals and then Wayfar can be 'beta' instead of alpha.  Here are those goals:

In addition to these main goals, there are dozens of ideas and bugs that must be addressed, several minigames not mentioned, and loads of content.  But completing the above would satisfy the basic core of the game and let us move into 'beta'.
Posted by swampdog at 12:26 PM