So after a minor break playing GriefMOO non-stop, I've got my nose back to the grindstone and done a whole bunch of stuff to improve wayfar. One thing that was lacking was any clear details as to how much damage your weapon will actually do so I added some stats to the gear command for each attack your weapon is capeable of.

Damage is shown per dice type, and has the fixed attack multiplier multiplier, the minimum and maximum dice that can be used in that attack and the range of the dice as well as a static damage bonus from the weapon. (+0 damage won't be shown, the +10 is from the 'balanced' weapon prefix).
As you can see, armor now shows bonuses as well in the gear screen.

On an unrelated note I made a couple more vehicles, a hovercraft which can travel over land and water and a large patrol boat. I also made a few changes to an existing gatling gun turret to make it easier to build and feed with ammunition and made a new gatling gun turret after reading up on the GSh-6-30 russian 30mm gatling gun as used in the Kashtan CIWS mounted on russian aircraft carriers. There's something about gatling guns that can 4000-6000 projectiles, each weighing 390 grams that is distinctly unnerving.

Oh yeah, and I made those random material armor pieces spawn with stat bonuses according to their quality.
Posted by Unknown at 1:39 AM


Whilst I could explain everything I've done in the past couple of weeks in a massive wall of text, pictures would say a lot more in a lot less space. 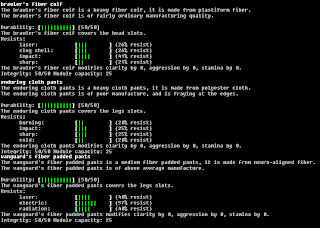 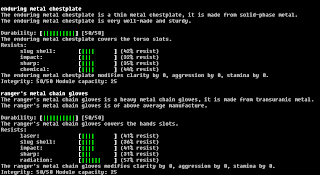 Customisable starships with movement duration based on engine thrust to ship mass ratio! 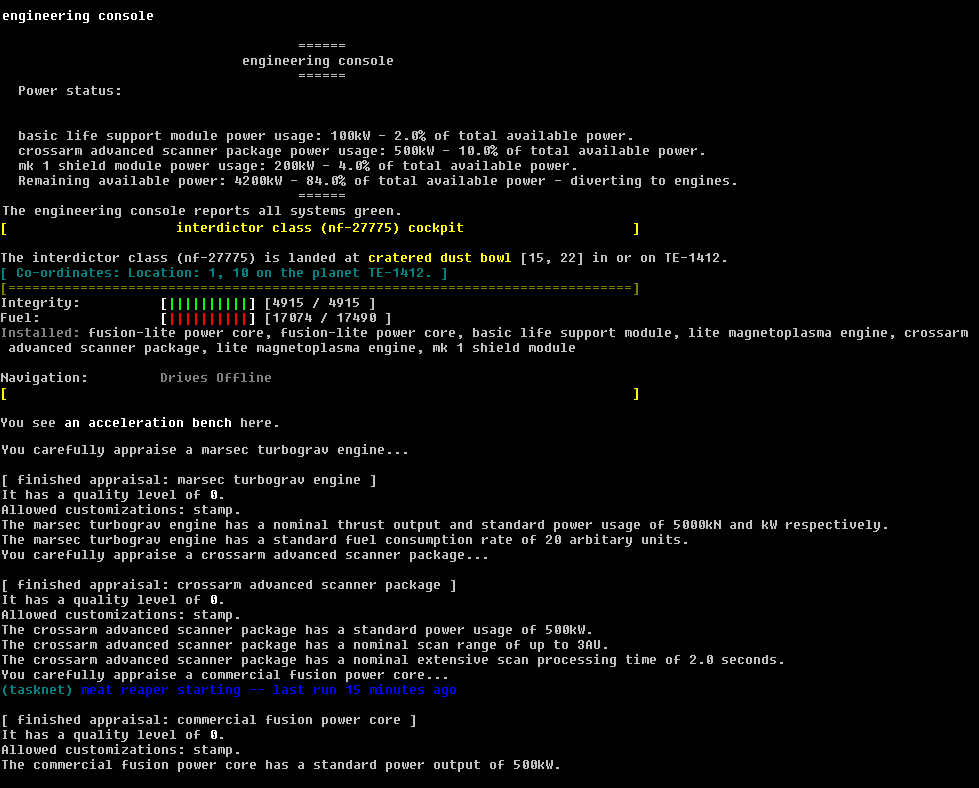 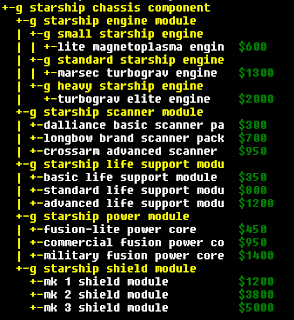 There's a whole bunch of other neat things which I haven't taken pictures of, such as working automated transport but there's too much to cover.
Posted by Unknown at 10:12 AM

* web integration fixed!
* regen chamber for vehicles and starships, allowing players to register for their next respawn at the chamber's location:

This article covers the following in the first section: pro-tips for action use, common problems, and suggested trouble shooting.  This tutorial is third in the series: Part 1, Part 2.


Extra utility verbs on $creatures and $players:
* is_doing(OBJ action, [ ?OBJ callback ]) - this requires the first argument, and the second is optional.  It checks a player or creature to see if they are executing the action sent as the first argument.  If the callback argument is also present, that is checked against the player's executing action.  If the creature or player matches the criteria, is_doing returns 1, otherwise 0.

Example:
" pretend this is a sanity check in an eat command";
if( player:is_doing($actions.mock_attack) )
player:tell("You can't eat right now, because you are attacking!");
endif

"and this one checks to see if the player is attacking with a sword";
"$weapons.sword would be a valid weapon object, and we're assuming the first callback in $actions.mock_attack is the weapon being used.";
if( player:is_doing($actions.mock_attack, $weapons.sword) )
player:tell("You use your sword to chop your food before eating it.  Oh boy!");
endif

Changing call back arguments in an $action
Scenario: You want to loop through an action exactly 5 times.

if(stage < max_stage)
stage = stage + 1;
"keep looping, by returning an action object from _finish. _continue will be called on the action you return.";
"Usually you return the action you're executing!";
return {this, {stage, max_stage}};
else
who:tell("Looping complete!");
"we can return E_NONE to finish the action, or fall through to more codes dealing with the specifics";
return E_NONE;
endif

Broadcasting events from within an $action

Events and callbacks should be familiar topics for anyone who has done any event driven programming.  The idea is simple: code 'broadcasts' an 'event', and other code 'listens' and then reacts to the event.  You broadcast with this verb, which is defined on #1 or $room depending on your hellcore version:
broadcast_event(INT is_start, OBJ action, OBJ who, LIST callbacks)

is_start is 0 for a completing action, and 1 for a beginning action.  action is the action object (or really whatever object) being broadcast, who is the action executor, and callbacks is a list of the callbacks from the action (exactly the same as args[2] within the $action itself).

Example on a player or creature, to receive walking messages:

hear_event_mock_walk
{starting, action, who, callbacks} = args;
direction = callbacks[1];
" as you can see we receive the args just like they are sent to broadcast_event";
if(!starting)
"if the walk is actually occuring, let's tell ourselves about it";
this:tell(who:name(), " walks off to the ", direction, ".");
endif

Calling an impromptu action from any object

You have an object, lets call it MEDICAL TERMINAL.  You have a verb allowing the player to INVESTIGATE MEDICAL TERMINAL, and you want a short action (not require start, continue, finish, but you'd like the delay and action messaging).  Here's how you do that.

This will display the player as "searching the terminal for valuable information, and within this _search_terminal verb you can do whatever simple operations you like without having to write a full action.  It will take 3 seconds for the action to begin (specified by the 3.0).
Posted by swampdog at 10:06 AM 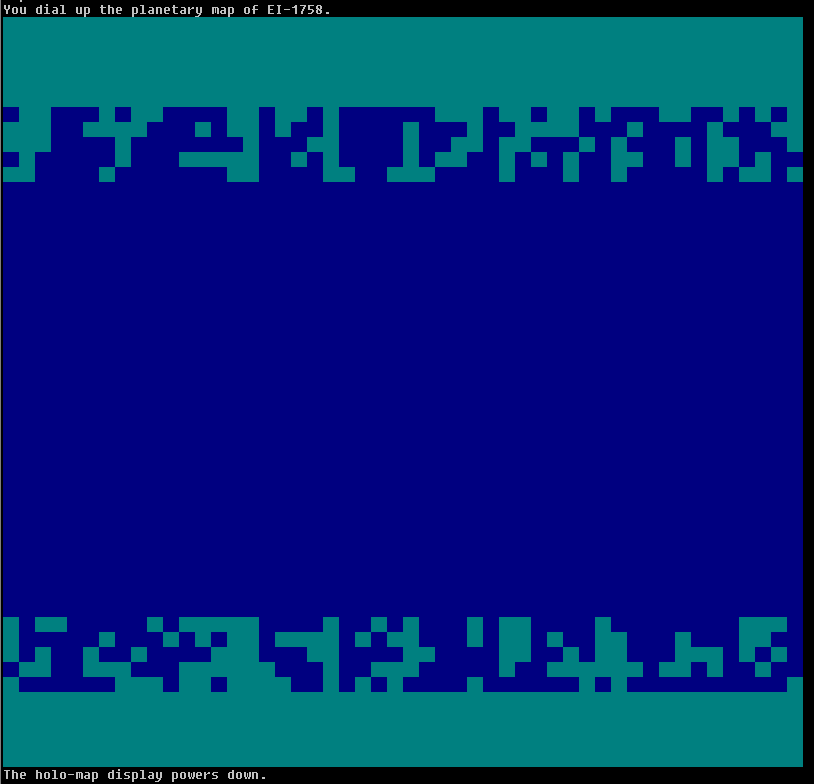 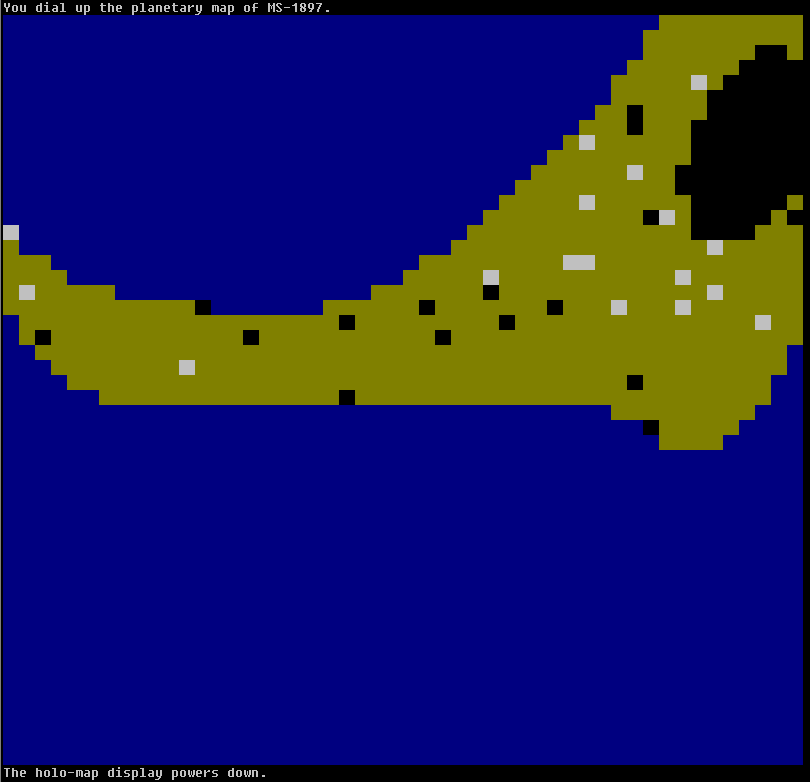